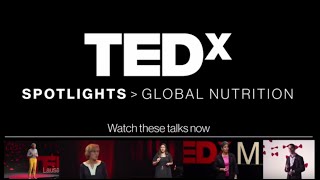 Check out all of the talks included in the playlist below:

The destructive effects of factory farming impact our health, the environment, and the quality of our food. “We are what we eat,” says tomato expert Louis-Albert De Brojlie, “bad news.” At TEDxLausanne, a barefoot De Brojlie AKA “The Gardener Prince”, offers an eco-friendly, economically feasible alternative to pollutive industrial farms: micro-farming. Incorporating the principles of permaculture, De Brojlie shares how we can work with the land to transform local agriculture and create scalable, resilient “farms of the future.”

Do the first 1000 days determine the rest of your life? | DeeDee Yates | TEDxWindhoek

The first 1000 days of life are fundamental for a child’s brain development, but what happens when a child is malnourished, or raised in a toxic environment? From TEDxWindhoek, educator DeeDeeYates delivers a poignant talk on the damaging, long-term influence that poor nutrition, lack of stimulation and exposure to violence has on adolescents. To lay the groundwork for future success, Yates encourages early intervention, asking parents to embrace their roles as first educators, and to “celebrate and protect the first thousand days of our children.”

Saving the oceans can feed the world | Jackie Savitz | TEDxMidAtlantic

How will we feed the world’s hungry without abundant oceans? With the threat of climate change and arable land on the decline, we’ll soon depend on oceans to provide the majority of our food. On the stage at TEDxMidAtlantic, Oceana VP, Jackie Savitz gives three key solutions for reviving fisheries in rich coastal areas: setting quotas, reducing bycatch, and defending marine habitats. Savitz is hopeful: “We didn’t have peak fish yet, we still have an opportunity to not only bring the fish back but to actually get more fish that can feed more people than we currently are now.” With the right fishery management practices in place, Savitz believes we can feed up to 700 million a year a healthy fish meal.

Anemia afflicts almost 200 billion people on the planet, those hit the hardest being women and children. Treatment for the iron deficiency can be costly and inaccessible, resulting in low patient compliance. During his research in Cambodia, Dr. Christopher Charles determined that close to 90% of the women and children in Cambodia were anemic. “Everywhere I went…no one had any energy, no energy to work, no energy to play, no energy learn,” says Charles. “The children who were raised anemic had no ability to sit in school and concentrate…scores of women had suffered significant hemmorrage during childbirth directly as a result of anemia.” Charles decided something had to be done and developed the lucky iron fish, a cheap, effective, environmentally sustainable way to add iron to the villagers’ diets. At TEDxDubaiSalon, Charles explains how he designed the iron fish and how it continues to improve the lives of Cambodian villagers.

Why cassava is a poverty fighter | Laura Boykin | TEDxPerth

White flies are one of the major causes of food insecurity in sub-Saharan Africa; they transmit plant viruses and feed primarily on cassava, a staple food for 800 million people. White fly fighter Laura Boykin explains that without cassava, there is no food or income for people in this region. “Cassava is a poverty fighter. If a small-scale family farmer has healthy cassava they can feed their family and they have enough to sell at the market to generate income…but cassava is under attack in East Africa by white flies.” In her passionate talk from TEDxPerth, Boykin describes her research on the speciation of these insects using supercomputing to prevent the spread of the white flies and plant viruses.